We are hard at work planning, but we are excited to learn about artists from the 1920's and create art in their styles, as well as to discover new things from 100 years later.

Last camp, we traveled the world, complete with tourist maps and passports! We did self-portraits a la Di Cavalcanti from Brazil, and we made mini-sculptures akin to the Kawaii Culture from Japan. We painted glass, did sculpture, played games and ate food from around the world. We're back now, but ready to hit the road again next summer!

Our Global Experience theme is 1968: A Movement in Time, given that so many historical and cultural events happened with such major impact on the country and world.  But it was also a time of macrame, pop art, op art, tie dye and more! We explored it all! 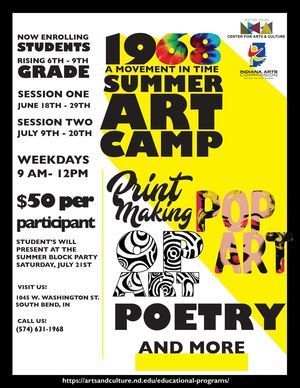 Summer 2017: It's a Better World with Books, a journey with art and literature

This year's theme, It's a Better World with Books, had students taking a literary journey around the world learning about other cultures through stories and books.  We did art from around the world, created community art pieces, explored foods and music from each of our "stops" and much more!

Our "Perspectives" Middle School summer camps tied into Indiana's Bicentennial!  We capped programming off with our All-IN Block Party on Saturday July 16, 2016. The children's mural is always on display in our side yard.

The camps focused on the unifying theme of South Bend's 150th anniversary. Student participants researched and created artwork or projects that focused on the past, present, and future of their community.  SB150 focused on the history of South Bend as well as the interactions of the individual students with it through artwork, creative writing, and photojournalism.  Pieces that were student-produced were featured in a local newspaper.

Each camp explored the idea of "Identity" in connection with the exhibit of the mural "Ecuador," by Oswaldo Guayasamin that was displayed at the NDCAC fall 2014. This was the first time that this piece was seen outside of South America, and NDCAC summer camp students got a sneak peek at the five panels summer 2014. Additionally, at the grand opening in September, the work the students created during the camps was on display alongside Guayasamin's. There were four different weeks, each with a different focus: visual arts, cooking, creative writing and photography.

Students learned about various art concepts while exploring the Civil Rights movement in honor of the 50th Anniversary of Martin Luther King Jr. Students experimented with different art medium and techniques that culminated in an art display at the IUSB Civil Rights Heritage Center.